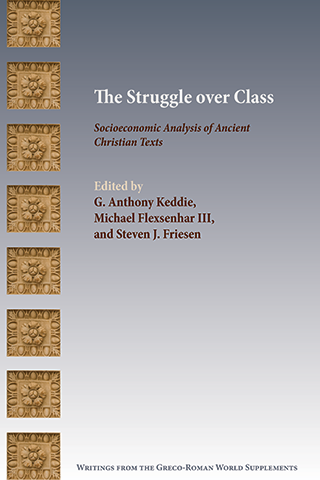 The Struggle over Class: Socioeconomic Analysis of Ancient Christian Texts

G. Anthony Keddie is Associate Professor of Early Christian History and Literature at the University of British Columbia. He is the author of Class and Power in Roman Palestine: The Socioeconomic Setting of Judaism and Christian Origins (2019) and coauthor of Jewish Fictional Letters: The Epistle of Aristeas and Related Literature (2018).

Michael Flexsenhar III is Visiting Assistant Professor of Religious Studies at Rhodes College. He is the author of Christians in Caesar’s Household: The Emperor’s Slaves in the Makings of Christianity (2019).

Steven J. Friesen is the Louise Farmer Boyer Chair in Biblical Studies at the University of Texas at Austin. He is the author of Imperial Cults and the Apocalypse of John: Reading Revelation in the Ruins (2001) and coeditor of Corinth in Contrast: Studies in Inequality (2014).