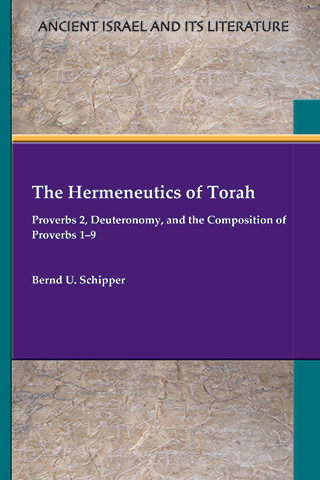 The Hermeneutics of Torah: Proverbs 2, Deuteronomy, and the Composition of Proverbs 1–9

This revised and expanded English edition of Bernd U. Schipper’s 2012 Hermeneutik der Tora incorporates the results of his continued research and writings on Proverbs. For nearly a century, many biblical scholars have argued that the main theological traditions, such as the divine law, God’s torah, do not appear in the book of Proverbs. In this volume, however, Schipper demonstrates that Proverbs interacts in a sophisticated way with the concept of the torah. A detailed analysis of Proverbs 2 and other passages from the first part of the book of Proverbs shows that Proverbs engages in a postexilic discourse around “wisdom and torah” concerning the abilities of humans to fulfill the will of YHWH exemplified in the divine torah.

Bernd U. Schipper is Professor for Hebrew Bible/Old Testament at the Faculty of Theology of the Humboldt-University of Berlin. His most recent publications are a commentary on Proverbs 1–15 (2019) and A Concise History of Ancient Israel (2019). In 2021, he received an ERC Advanced Grant, which is the highest European research award currently available.