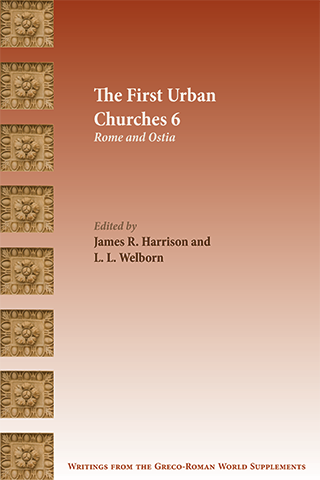 Building on the methodologies introduced in the first volume of The First Urban Churches and supplementing the in-depth studies of Corinth, Ephesus, Philippi, Colossae, Hierapolis, and Laodicea (vols. 2–5), essays in this volume challenge readers to reexamine what we know about the early church within Rome and the port city of Ostia. In the introductory section of the book, James R. Harrison discusses the material and documentary evidence of both cities, which sets the stage for the essays that follow. In the second section, Mary Jane Cuyler, James R. Harrison, Richard Last, Annelies Moeser, Thomas A. Robinson, Michael P. Theophilos, and L. L. Welborn examine a range of topics, including the Ostian Synagogue, Romans 1:2­­–4 against the backdrop of Julio-Claudian adoption and apotheosis traditions, and the epistle of 1 Clement. In the final section of this volume, Jutta Dresken-Welland and Mark Reasoner engage Peter Lampe’s magnum opus From Paul to Valentinus; Lampe wraps up the section and the volume with a response. Throughout, readers are provided with a rich demonstration of how the material evidence of the city of Rome illuminates the emergence of Roman Christianity, especially in the first century CE.

James R. Harrison is Research Director and Professor of Biblical Studies, FAHA, at the Sydney College of Divinity, Australia. He is author of Paul and the Ancient Celebrity Circuit: The Cross and Moral Transformation (2019) and Reading Romans with Roman Eyes: Studies on the Social Perspective of Paul (2020).

L. L. Welborn is Professor of New Testament and Early Christianity at Fordham University and Honorary Professor of Ancient History at Macquarie University. He is the author of Politics and Rhetoric in the Corinthian Epistles (1997) and An End to Enmity: Paul and the ‘Wrongdoer’ of Second Corinthians (2011).