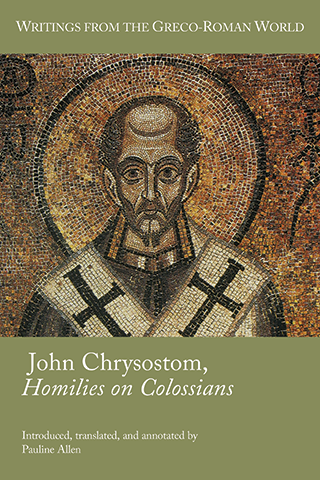 Pauline Allen translates Frederick Field’s text of John Chrysostom’s twelve homilies on Paul’s Letter to the Colossians. Chrysostom concentrates in part on the apparently prevalent angel worship in Colossae (in modern Turkey). These homilies provide many details about everyday life in the late Roman period, such as the position of slaves and their treatment as well as various aspects of raising healthy, educated children. The themes of conflict between pagans, Jews, and Christians in the community, as well as the distinction between rich and poor in late antiquity, run throughout the homilies. This latest text and translation volume from WGRW is an essential resource for scholars and students interested in the history of the church.

Pauline Allen is Alexander von Humboldt Fellow, Fellow of the Australian Academy of the Humanities, Research Associate at the University of Pretoria, and Fellow of the British Academy. She is also the former President of the Association Internationale d’Études Patristiques and cofounder of the Asia-Pacific Early Christian Studies Society. Her contributions to the SBL Press series Writings from the Greco-Roman World include John Chrysostom, Homilies on Philippians (2013).