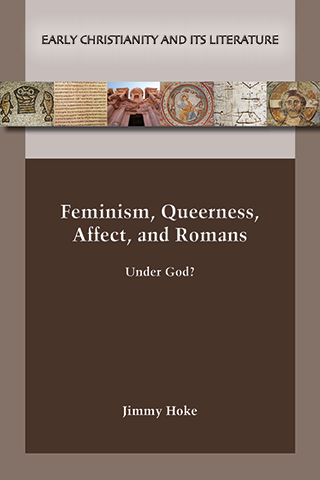 “This is a book about submission and subversion, injustice and justice, heroes and villains.”

In Feminism, Queerness, Affect, and Romans: Under God? Jimmy Hoke reads Romans with an innovative, intersectional approach that produces distinctive meanings for passages that probe how queer wo/men who first encountered Paul’s letter could have engaged with it. Though Paul’s letter to the Romans arguably contains the Bible’s strongest condemnation of queer wo/men (1:26–27), that is not the letter’s full story. Hoke turns a feminist and queer gaze toward Paul’s conception of faith and ethics, making explicit how Paul’s theology throughout Romans has been affectively motivated by imperial notions of gender, race, and sexuality. Moving beyond Paul’s singular voice, Hoke engages with a feminist and queer praxis of assemblage to generate plausible ways wo/men of Rome interacted with this epistle. By engaging affect theory, Hoke brings to life not only ideas and words but the feelings and sensations that moved in-between some of the earliest Christ-followers, revealing how queer wo/men were there among them and what that means for queer wo/men today. Hoke includes a reader’s guide with key terms used throughout the book, making this an excellent option for both students and scholars beginning to engage not only Paul’s letters but also the complex worlds of feminist, queer, and affect theories.

Jimmy Hoke (he/they) is Visiting Assistant Professor of Religion at Luther College and the author of several articles and essays, including “Unbinding Imperial Time: Chrononormativity and Paul’s Letter to the Romans,” in Sexual Disorientations: Queer Temporalities, Affects, Theologies (2018), “Be Even Better Subjects, Worthy of Rehabilitation: Homonationalism and 1 Thessalonians 4–5,” in Bodies on the Verge: Queering Pauline Epistles (2019), and “Behold the Lord’s Whore: Slavery, Prostitution, and Luke 1:38,” in Biblical Interpretation (2018).