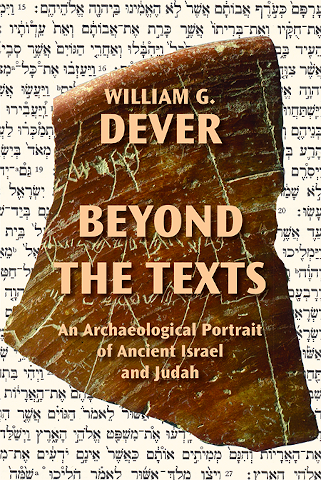 Beyond the Texts: An Archaeological Portrait of Ancient Israel and Judah

William G. Dever offers a welcome perspective on ancient Israel and Judah that prioritizes the archaeological remains to render history as it was—not as the biblical writers argue it should have been. Drawing from the most recent archaeological data as interpreted from a nontheological point of view and supplementing that data with biblical material only when it converges with the archaeological record, Dever analyzes all the evidence at hand to provide a new history of ancient Israel and Judah that is accessible to all interested readers.

William G. Dever is Distinguished Visiting Professor at Lycoming College in Williamsport, Pennsylvania, and Professor Emeritus at the Arizona Center for Judaic Studies at the University of Arizona. Professor Dever has more than fifty-five years of archaeological field experience and is the author of more than four hundred publications, including What Did the Biblical Writers Know and When Did They Know It? What Archeology Can Tell Us about the Reality of Ancient Israel (2001), Who Were the Early Israelites and Where Did They Come from? (2003), and The Lives of Ordinary People in Ancient Israel: Where Archaeology and the Bible Intersect (2012).